Or rather, now that I have Reason 5, I can have too much fun making crazy little tunelets like this,

Next-to-someday step: gain the skills to get a clear picture of how and where to go with a riff-and-variations kinda thang. Doesn't need to go anywhere, but it feels great if it can jump off to somewhere super.

This song in particular is what I picture Snake Plissken hearing in his mind while driving through a disco, in a souped-up abandonded station wagon that has a machine-gun mount and a state-of-the-art 8-track player.
Posted by metasailor at 12:23 PM No comments:

And another wee tune

I call this one "full of whist", although somehow when I first typed that name just now it came out as "full of shite". : )

Louis CK in the Cafe of Babble

My friend Cary Woodworth had a guest bit on the great Louis CK's show "Louie", on FX. I how many of the actor got SAG cards for their dialogue.

And here's another version of Cary's specific scene, output at a different resolution:

Saw this Google ad pop up on a YouTube trailer - and thanked Whatevah for the glory and the beauty of the cosmos. 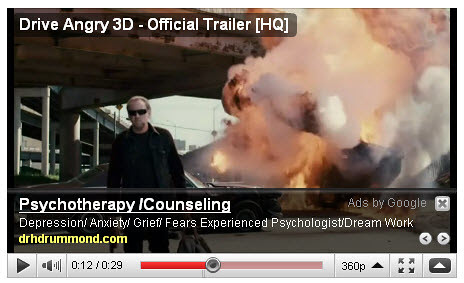 The film is some sort of a phoned-in paycheck for Nicholas Cage - an unfortunately common occurrence of late.
Posted by metasailor at 5:10 PM No comments:

The way a hun deals with unhappiness, by making others unhappy until he is happy again.

Like everyone else on the Internet, I've listened to Mel Gibson's recorded rants. Backwards and forwards. While I feel increasingly grateful for my little life.

His ex-girl Oksana's clearly egging him on with her calmness, and also saying things specifically for the record. That said, he is so obviously unhinged it's hard to fault her for doing that and more besides.

The thing that struck me the most, was that Gibson's wasn't really yelling at her. She seems more like a *direction* he was yelling. What he really seemed to be yelling at what was a hole inside himself. A big, empty chasm that's been with him for most of his life, that he is now in despair of ever getting rid of. A broken part of himself, almost certainly helped along by his crazy freak of a father, that he has tried to soothe with art, fame, success, wealth, more success, a wife and a family for 27 years, and when that didn't work, a hot new piece of ass.

And when that last desperate step still didn't fix the hole inside him, he reached a truly epic despair.

When Mel Gibson yells at that ex-girlfriend of his, he is really yelling at the abyss. And it's ignoring his pleas as it's tearing into him, because the abyss is him - and what he is trying to ignore.
Posted by metasailor at 5:41 PM No comments:

A Beginning of a Long Response to a Wizbang post.

This is in response to an article on Wizbang. It's a long story as to why it's here and not there, but that isn't really relevant right now.

I've broken down every single claim I think is provably wrong, and listed them below. I'll post citations for my claims in the comments to follow this post.

The Democrats in general and President Obama in particular, have discovered all too late a political liability in the continuing unemployment figures. As the possibility of losing control of the House and Senate has crept towards probability, the Democrats have finally begun to consider how to address the problems their own policies made.

1. Democrats haven't realized unemployment figures being high would be a problem.
2. Democrats might lose control because of this alone, rather than it being an off-election year, in which the party in the white house typically loses seats
3. The Democrats are responsible for unemployment, as a consequence of *their own policies* (as opposed to Republican policies which have created the recession and the unemployment)

...recessions happen from time to time, and a review of the past shows that neither Republicans nor Democrats have been able to prevent their occurrence. However, it is possible to reduce the length and severity of a recession sometimes, and to make it worse as well. The best example of this would be the Great Depression, a serious recession made worse by the foolish policies of both President Hoover and President Roosevelt (each chose an extreme solution that led to unintended consequences). The mistakes made by Hoover were built on the assumption that government did not need to do anything, while Roosevelt's mistake was that anything government did would help.

4. That Hoover's mistakes were based on the assumption that government did not need to do anything - his mistakes were based on the notion that government *shouldn't* do anything, that it was morally wrong for government to interfere.
5. That Roosevelt's policies involved any mistakes that were near the magnitude of Hoover's
6. That Roosevelt's policies made worse OR prolonged the depression, instead of easing and shortening it.

President Obama inherited a recession, this is true. However, the recession was relatively mild, and most economists (the serious ones, not the ones who chase television stations and go hunting for book deals) say the recession itself actually ended earlier this year. The problem is that the jobs never came back, and we have to ask why. For that, we go back to the Depression era. The Depression is not often examined carefully for cause. Most people assume it was due to the stock market crash of 1929, but if so you would have to ask why....When a whole industry loses stock value, the effect is magnified subjectively even though the company is still level with its competitors; if the public believes the industry is sound it will continue to support it, but if they lose confidence the entire industry will suffer.

The present economic condition was created through three principle causes - the housing market bubble burst, the financial market crisis from CDOs, and stagnant strategy from the U.S. government....If consumers stop buying, the economy slows, and that is too strong a force to ignore or imagine that government can control. It should be noted at this point, that nothing done by the Obama Administration has been directed at improving consumer confidence. What improvement has occurred, has happened in spite of his policies.

Incorrect Claims:
9. Stimulus spending and unemployment extensions are each a "stagnant strategy", when in fact it is exactly the same strategy pursued by FDR which helped get us out of the Great Depession - because it enables consumers to continue buying what they need, rather than being forced to stop.
10. That Obama could somehow speed up the recovery by increasing "consumer confidence".

The problem in restoring jobs, is that this needs corporate confidence, ...When government actions threaten higher taxes, obstruction of business opportunity, penalties for apparent political orientation or simply being a target for a politician's campaign strategy, businesses will choose to avoid the risk and control costs.

Incorrect implications:
11. The implication that Obama's economic policies at all, EVER, include penalties purely for political orientation
12. That higher taxes ALWAYS threaten job growth more than stimulus spending can increase job growth - as increased spending shows businesses **actual money** - as opposed to "increasing their confidence" that if they start hiring now, they'll make more money someday.

There are three driving forces at work in the present situation regarding unemployment. The first is the obvious fact that President Obama's actions have ignored unemployment, or made conditions worse by attacking major potential employers. The second is that Republicans, sensing significant opportunity in the fall midterm elections and bitter about the contemptible treatment they have received from the most partisan President since Nixon, have for the most part decided to let Obama and the Democrats receive the due consequences of their decision. And the third force is the nature of the economy itself. The American economy in general has been shifting from manufacturing to service for decades, and we are now seeing the effects of that transition in the lack of ability of many workers to transition to the new demand.

Incorrect Claims:
13. That Obama's actions have "attacked" major potential employers AT ALL. I'd love to see some specific companies that have been attacked by Obama's economic policies.
14. That Obama's actions have ignored unemployment, rather than being focused on repairing it
15. That there is some "new demand" for services that workers are showing a "lack of ability" to transition too. (This last one is especially weird).

The most recent bill of debate has been the option to extend the amount of unemployment benefits. Those in favor of the bill argue for it on compassionate grounds...such a bill increases costs for employers and therefore further reduces the opportunity for companies to hire new employees. The bill then is largely superficial in effect, and may be said to do more harm than good to the nation as a whole.

Incorrect Claims:
16. That those who argue in favor of extending unemployment due so solely on "compassionate grounds".
17. That because such a bill may increase costs for employers, which can't be outweighed by the increase in consumer spending that unemployment benefits make possible.

...Money has to come from someplace, and so benefits paid by government agencies must come from public revenues....holistically the government action is parasitic and does more harm than good by definition.

Incorrect Claims:
18. that "money has to come from some place" means it can't come from credit.
19. that government money coming from taxes somehow means that it can ONLY be parasitical - i.e. that government money can't be spent in a way that **increases** value
20. that, again, there is not also a **pragmatic** reason to continue unemployment spending - that it keeps the economy afloat in times of trouble so that it can fully recover.

Neither liberals or conservatives, Republicans nor Democrats, enjoy perfect knowledge of how government should operate in all cases and situations. It is therefore vital for a discussion, even debate, to continue on specific actions the government may take or consider, in ever aspect of the public welfare. We should be able to agree that as situations change, perspectives on all the major issues develop from former positions to more considered or sometimes evolved opinions. Accordingly, for all the strong emotion present in our debates, it is important to listen to the other side and consider what they offer. Even if rejected, the dialogue and respectful consideration of alternatives is a quality much in need and short in supply.

A statement which I agree with wholeheartedly.
Posted by metasailor at 12:08 AM 41 comments: